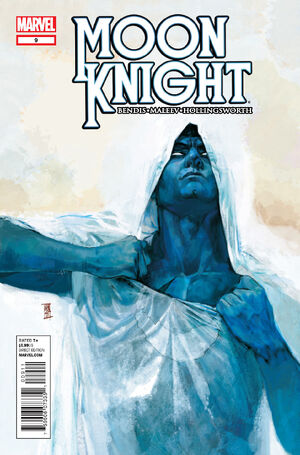 Using the plasma shield that Buck created, Marc protects himself and Echo from Nefaria’s attack rays. Moon Knight quickly throws the shield to distract Nefaria and rush Maya to safety. On the rooftops, Marc runs along the building edge to avoid Nefaria’s rays but he is still blown off the ledge. In a clutch moment, Marc uses the webslingers that Buck created for Marc to slow his fall. Now on the streets, Nefaria hovers over Marc as he tries to run. Nefaria swoops down releasing his rays but Moon Knight blocks the attack once again with his shield, but this time, he grounds Nefaria to the floor by webbing him down. Maya enters to strike.

Nefaria releases himself to attack Maya but Marc sling’s him once more to hold him back and allow a car to collide with him. The two now simultaneously attack and Moon Knight releases the Wolverine claws to cut Nefaria’s neck. Marc is hesitant to kill Nefaria which gives the Count the opportunity to break away. Maya tries to keep him down but he unleashes a ray that pierces Maya in the chest. The Wolverine within Marc is enrage and kills the Captain America and Spider-Man personalities. Only listening to Logan, Moon Knight becomes unleashed.

The hosts share some diverse opinions on this issue – nothing new to the divisive Bendis run…who do you agree with? Tune in and then let us know!