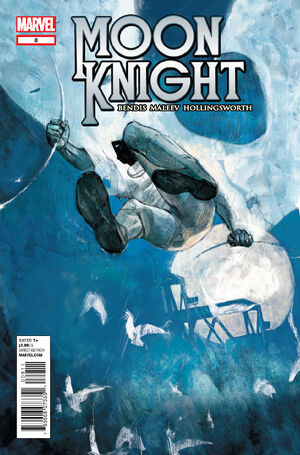 The Brain Michael Bendis run has always proven a great point of discussion and the boys waste no time analysing the pros and cons!

At the precincts garage, Marc leaves Snapdragon tied to a detectives car. Alerted, the detective fires at Moon Knight but he takes out Cap’s plasma shield to stop the bullets; they’re on the same side. Marc is able to settle the officer down and share his information on Count Nefaria to him. As a token of trust, he gives Maya’s recorded battle footage to him. The detective reluctantly agrees on their allegiance. The next morning, Marc is watching a ridiculous cut from his show but he steps away for a meeting… with his voices. They pressure him to strike as soon as possible. Back at his house, Marc is working with Buck to upgrade his gear. In the process, he upgrades Echo’s staff with vibranium metal.

Meanwhile at the police station, Detective Hall brings the footage to his captain but he disregards it by turning it to a federal case; he is on Nefaria’s payroll. Hall decides to visit Snapdragon and tells her that no mob lawyer, super criminal, or ninjas have arrived to extract her which leaves Hall to believe that she might be burned; it might be beneficial for her to talk. Across town, Moon Knight and Echo spend the night by taking down Nefaria’s operations in order to draw him out… which worked as he floats behind them.