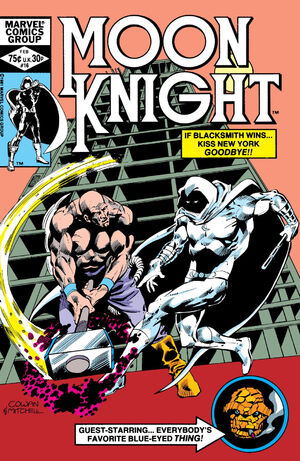 High Priest of Khonshu Rey invites good friend and fellow Loony muso, Knol ‘Loony Toonz’ Tate to go through another issue from that classic period of the pre-2000s!

After a much need catch up, Knol and Rey crack into the double story issue and break down the ins and out of the first non-Doug Moench / Bill Sienkiewicz issue!

PHASE OF THE MOON: Waning Crescent

Shadows of the Moon

Seekers of the Stone

Shadows of the Moon

Moon Knight has a close encounter with a terrorist named Sharp on a construction site late at night. Sharp tragically dies in a scuffle wth Moon Knight, leaving the White Knight with no answers.

Meanwhile a young boy named Doug admires the caped crusading activities of Moon Knight after it is featured on the news, much to the chagrin of his father, Detective Stephen Mills.

Elsewhere, Alexander Latimer and his second-in-command, Mitchel, plot a scheme to betray their own country by taking out the east cost communications grid with a nuclear device hidden beneath one of the construction sites that Latimer owns – the very same one where Sharp fell to his death. Latimer hires Blacksmith – an ex-con with a coloured past – to replace Sharp and to escort one of his technicians, Mr. Morris, to the construction site in order to arm the nuclear device and to set the wheels in motion.

Detective Stephen Mills is killed whilst trying to investigate the death of Sharp, leaving Doug disenchanted and keen to seek out Moon Knight.

Having learnt of Latimer’s underhanded dealings, Moon Knight encounters Blacksmith and Morris and a fight ensues. Doug arrives also and almost distracts Moon Knight to the point of defeat. The nuclear device prematurely detonates before it can be fully armed, allowing Moon Knight to round up his stunned opponents.

Doug learns a valuable lesson in following the law, and Moon Knight leaves him to decide what path in life he wishes to pursue.

Seekers of the Stone

An early adventure of when Marc Spector was a mercenary before becoming the Fist of Khonshu! This adventure situates Spector in Stuttgart, accepting a job from an artist called Collins.

Spector is to claim an artefact from a Mr. Karg, which Collins hopes will reignite his failing sculpting career. The artifact is the legendary Medusa’s Head, and Collins hopes to turn people to stone and pass them off as art works.

The equally Machiavellian Mr. Karg captures Marc Spector and Collins’ daughter, as they both try to steal Medusa’s Head from him.

In a desperate move, Spector reflects the evil glare of Medusa back at Mr. Karg as he takes it out of the box, hoping to kill the pair.

Spector and Collins’ daughter escape and return a now head of stone to Collins.

Spector later becomes Moon Knight in years to come … but what becomes of Collins?