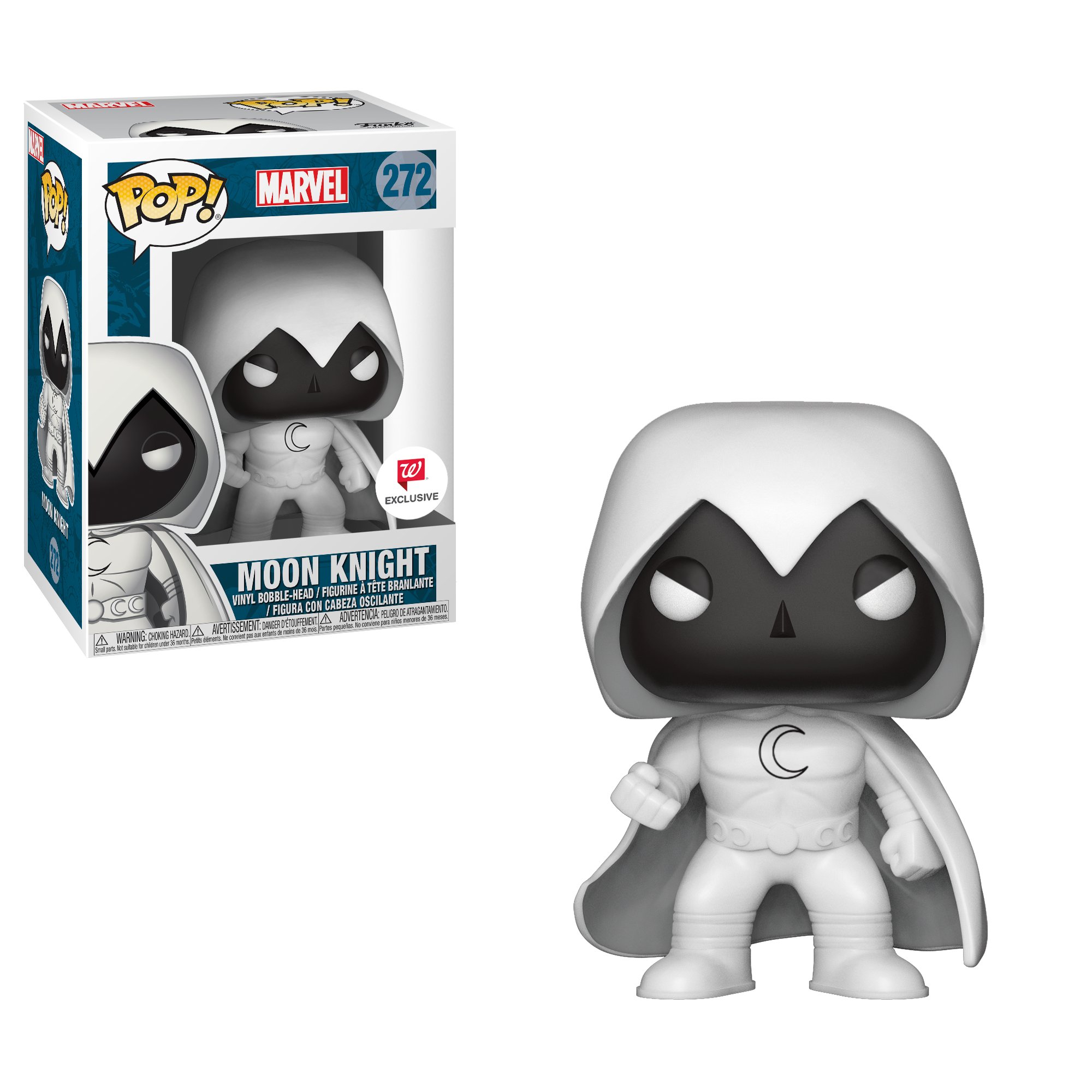 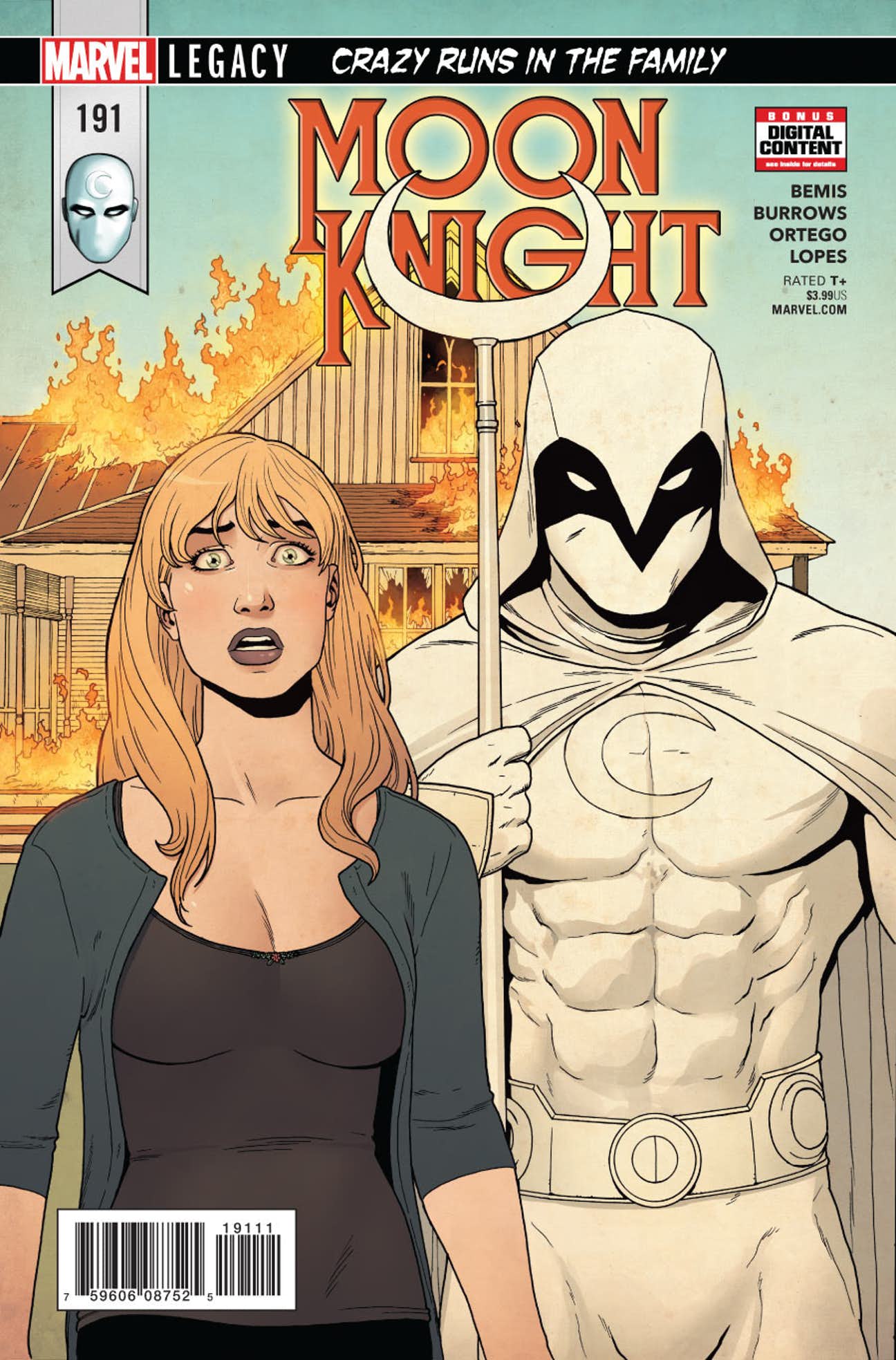 Even in a week of little-to-no news for Ol’ Sheet Face, the ever rambling Priests of Khonshu Rey and Connor, bring forth a new episode all about the new Classic Moon Knight Funko POP and the latest issue of the all new Moon Knight run. Issue #191!

With The Sun King and Bushman invading Marlene’s house and threatening her child, it doesn’t take long for Marc and Marlene to spring into action!

As the tension builds with their daughter Diatrice, in the hands of Bushman, the two parents lunge at their enemies in an all out tussle. Marc grabs Diatrice and rushes out whilst Marlene holds her own against the terrifying Bushman and his men.

With Diatrice safely outside, Marc rushes back in again and outskilled, Bushman and his cronies fall to Moon Knight’s fists and crescent darts. The Sun King is not to be ignored and Spector feels the full brunt of it with a sweeping flame of Ra directed towards him. With clothes aflame, Spector strips to his boxers but not before sheathing his face with Moon Knight’s visage. Like a bull in a china shop, Moon Knight launches himself at the Sun King and the two find themselves crashing through a glass door and into the backyard.

Whilst Moon Knight gets the measure of his opponent, Diatrice appears and is angered at the destruction of her playset. With nothing to do but escape, Moon Knight grabs her and flees from the Sun King, in the hope to catch up with Marlene. They quickly go inside but find no one there, save for a blood scrawled message on the wall that Marlene has indeed been taken.

Elsewhere in an unnamed penitentiary, some guards casually play poker before one of them, Nick (who is ever the brunt of the joke as he too sports an eye patch like his more famous namesake) is revealed to be a Sun King sympathiser. Nick has sustained injury and humiliation at the hands of Moon Knight, so as revenge, he releases one of the criminals currently detained – it’s none other than The Truth! At first thought dead, The Truth is very much alive and he leaves a path of crippled guards in his wake as he strolls out towards his revenge.

Back at Marc’s apartment, a conversation is being held in Marc’s head amongst his personalities. Khonshu reveals to Marc the nature of the attacker he fought at Marlene’s house. It’s Ra – Khonshu’s father – which has a hold of the Sun King and it is Ra that is ‘their invisible king…a leviathan made of anti-matter’. Khonshu wants Ra destroyed and so warns Marc that he must face the Sun King.

In an undisclosed hideout, Bushman, The Truth and The Sun King confer their plans to draw Moon Knight towards them. They are also in search of a base, a place to establish themselves. As Sun King puts it, “Every revolution needs a heartbeat”. They confirm that Saint Palaemon Island is the place for their revolution, and Sun King’s intent is to take Marlene along to lure Moon Knight into his death.

Back at the apartment, Marc awaits for a friend to arrive. He tells Diatrice of his good friend Frenchie, who he intends to watch over Diatrice whilst Marc travels to save Marlene. A dependable, fearless and gentle soul, Frenchie seems the perfect fit to be the guardian of Marc’s daughter. There’s a knock on the door and both Marc and Diatrice are excited to reunite with an old friends.

As Marc opens the door, we see Frenchie still in his asylum clothes, blood mottled and decayed. Frenchie is more than just another escaped mental patient…he’s also a zombie!

Capes & Lunatics Podcast – Catch them on the social media below!