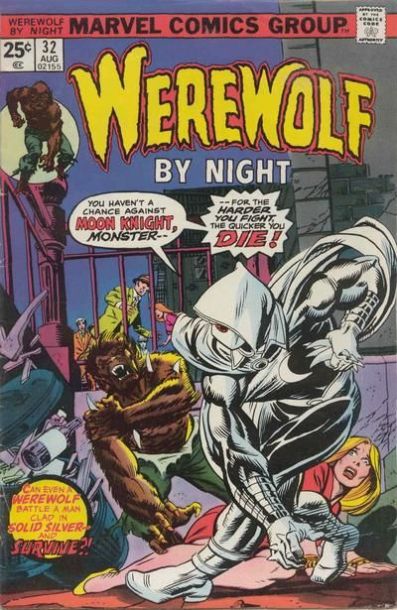 In the aftermath of the brilliant first issue by Bemis and Burrows, the High Priests use the time waiting for the next issue, to return to reviews of the classic run.

With it, comes a massive undertaking to go chronologically from Moon Knight’s very first appearance, to all his runs as well as appearances in other comics – phewwww!

Werewolf by Night #32 & #33 are served up for scrutiny in this episode – and we are very excited to have some guest narrators whom we’ve spoken about before and are the inspiration for us doing the podcast in the first place!

Levins and Siobhan, hosts of , ‘Serious Issues – Comic Book Talk!’ lend us their velvet tones to deliver us the Bare Bones for issues #32 and #33 this episode!

Enough with reading this summary – crack open your books, Loony and get ready to treat your ears – we are at it again!

We are thrust into the middle of a deadly fight in a street alley between Jack Russell (The Werewolf by Night) and a fast and brutal adversary named Moon Knight. Though sporting what appears to be a hand injury, The Werewolf continues to trade blows with the Jet and Silver Avenger, at one point almost biting his neck for a killer blow. Moon Knight proves too skilful and as a crowd forms around the fight, he relentlessly strikes The Werewolf not only with fists but with his silver spiked gloves, and his deadly crescent darts.

As The Werewolf struggles to remain on his feet after the barrage of blows from Moon Knight, he reflects on how he found himself in this position, fighting for his life against this unstoppable lunatic.

Memories of only the night before resurface in Russell’s mind, and he remembers a fight in the snow with his best friend Buck Cowan. As The Werewolf, Russell almost kills a small 7 year old girl named Buttons. Buck, however, throws himself at The Werewolf saving Buttons,but in doing so places himself in harm’s way. The Werewolf strikes out and injures Buck, leaving him for dead.

As the blizzard in the snow subsides and as The Werewolf no longer holds interest in Buck or Buttons, it wanders off and eventually reverts back to Jack Russell. In the time it takes for Buck to be discovered and brought to hospital, Jack makes his way home, bewildered that Buck doesn’t show up for them to head home together. By the time Jack reaches his house, news of Buck slipping into a coma has reached Jack’s father. Jack is both frustrated and saddened at what he hears and when he arrives at the hospital to see his friend in a coma, it proves all too much. Jack strikes out at the wall, breaking his hand. The pain however, is muffled by Jack’s anger.

Jack returns home to his father but finds an unexpected guest with him – it’s Moon Knight, and when Jack asks exactly just who Moon Knight is, we are treated with a brief origin and motive.

A highly secretive organisation known as The Committee hire a mercenary named Marc Spector for a mission. Spector’s profile is impressive – a veteran of three African wars; five South American revolutions; a stint in the CIA; weapons expert; master of all martial arts, ex-prize fighter and marine commando. Spector appears to have the credentials to do the job. The Committee arm him with a suit, weapons and cash, and his job is to bring The Werewolf to them!

With the motive revealed, Jack’s father tackles Moon Knight, allowing Jack to flee. With the full moon out, however, it doesn’t take long for Jack to transform into The Werewolf by Night. He stumbles into an alley and we’re brought back to where the story began – Moon Knight, The Werewolf and a crowd of intrigued onlookers.

As they continue to fight, we briefly see Jack’s sister Lissa and her friend Topaz in their apartment, shaken by the events of what happened to Buck, their friend. A helicopter hovers above the apartment building and crashing through their window we see the first appearance of Frenchie, Moon Knight’s accomplice. He’s there to take Lissa and Topaz hostage – insurance maybe, against The Werewolf, in case Moon Knight is unable to fulfill the mission.

Back in the alleyway, The Werewolf continues to defend himself against the far superior fighting skills of Moon Knight. He becomes his worst enemy – he strikes out in a berserker rage at Moon Knight, but uses his broken hand. As the pain distracts him, Moon Knight is able to take advantage and with his silver truncheon, bludgeons The Werewolf into submission.

With Lissa and Topaz bound in the helicopter, Frenchie flies in to pick up Moon Knight who finally has his target – The Werewolf – acquired.

As the  police arrive, the onlookers look in awe and clear a path as Moon Knight heads to the helicopter, away from the sirens, and into the night.

We see  Moon Knight and his prize, an unconscious Werewolf, making a hasty exit from the streets where they tussled in the previous issue before. The police have arrived but are unable to apprehend Moon Knight as he is whisked away in Frenchie’s chopper –  the trusty rope ladder a lifeline for Spector and his prize.

Meanwhile in Haiti, a seedy character named Northrup tries to bribe a Haitian customs officer for the whereabouts of one Raymond Coker. Coker appears to also have had a history with werewolves. It is not because of this, but more because of Northrop’s character that the custom officer refuses to assist him. He knows a dodgy customer when he sees one, and so Northrop leaves in a huff, threatening to find Coker by any means possible.

Coker, in fact, is in a Haitian swamp speaking to an oracle named Jeesala,  and her perceptive gaze seems to recognise the curse that once beheld Coker. It is not this which draws Coker to seek Jeesala, but something else – a horrifying tale of murder and resurrection. For it seems Coker’s great-grandfather, Jaranda has risen from the dead and is terrorising the small village from whence he came. Jeesala mentions that only one person can deal with the likes of this – that of zombies – and that person is Jericho Drumm.

Back, high above the sky, Moon Knight drifts on the ladder from Frenchie’s helicopter, with The Werewolf in check. Suddenly, The Werewolf awakens and despite the great height that they are at, he attacks Moon Knight on pure instinct. They both fall from the ladder and land in the ocean 500 feet below with an almighty splash. With Topaz and Lissa looking on from the chopper fearing them dead, they soon see the pair alive and at each others’ throats yet again. It’s an epic fight with neither getting the better of the other and it is only when The Werewolf inconveniently reverts back to Jack Russell, that Moon Knight makes the most of it and subdues him with a swift kick. With the cargo again compliant, Moon Knight lugs Jack onto the ladder of the chopper once again and they resume their way towards The Committee, for Moon Knight to receive his payment.

They arrive at an undisclosed location – a meeting place of which the Committee has arranged. With Jack safely in a cage, and with Topaz and Lissa bound, The Committee leader commends Moon Knight for a job well done. Not convinced that the man in the cage is indeed a Werewolf, The Committee refuse to pay Moon Knight until the full moon rises in the evening. Jack, seeing his sister and friend bound and finding himself in a cage, begins to see red and by the time the full moon does arrives, Jack is already in a highly agitated state. Right before their very eyes, The Committee see Jack Russell transform into The Werewolf! Confirming that Moon Knight has completed his job successfully, they pay him and reveal the purpose of attaining The Werewolf. The Committee intend to use The Werewolf as a weapon, to assassinate anyone that get in their way.

Having seen Jack as a decent man, and hearing The Committee’s nefarious intentions, Moon Knight has a change of heart and decides to free The Werewolf. Moon Knight helps The Werewolf out of the cage and the two attack The Committee. The ferocity of both the Moon’s Knight and the Werewolf by Night is too much for The Committee and before long, all the members have either fled or have been killed. Moon Knight frees Topaz and Lissa and although he tries to reason with The Werewolf, is forced to let him be. A creature of pure instinct does not understand camaraderie and Moon Knight is not one to try and convince it.

Where to Hear Us!

Drop us a line!